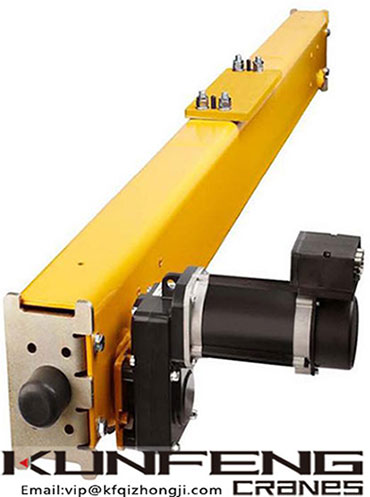 The crane end beam refers to the running part of the crane, which is connected with the main beam, where there are four wheels at both ends of the crane beam, and one side is two wheels; one driving wheel and one driven wheel.
The end beam section plays an important role in the crane and is a key component for carrying translational transport. The end beam part is composed of a wheel combined end beam frame, and the end beam part mainly comprises an upper cover plate, a web and a lower cover plate; the end beam is formed by connecting two sections through the connecting plate and the angle steel with high-strength bolts. Reinforcing ribs are provided inside the end beams to ensure the stability of the end beams after being loaded. The main dimensions of the end beam are determined according to the span of the main beam, the track of the cart and the gauge of the trolley; the operation of the cart adopts a separate transmission scheme. When assembling the crane, first connect a section of the end beam with one of the main beams, and then connect the two sections of the end beam.